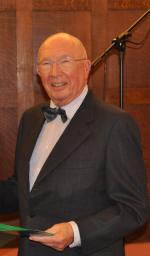 After completing his medical studies and qualifying in 1954, Dr Gonsette specialised in neurosurgery. He then left with his family for Montpellier to study at one of Europe’s best schools of neurosurgery. On returning to Belgium, he worked in his field at the St-Michel Clinic in Brussels while pursuing research on the blood-brain barrier. This subject, which is fundamental to understanding multiple sclerosis, was the subject of the agrégation dissertation which enabled him to teach at university level at the Catholic University of Louvain. Later, in the early ‘90s, he was given the opportunity to start an excellent neurology and neurosurgery department at the St-Pierre d’Ottignies-Louvain-la-Neuve hospital, which became a renowned training centre for many assistants.

During all those years, concurrently with a heavy clinical workload, even after his retirement and up to his sudden death, Richard Gonsette was intensely active in multiple-sclerosis research. For a time, he was Director of the Belgian Multiple Sclerosis Center in Melsbroek as well as chairman of the Belgium Multiple Sclerosis Study Group. The purpose of this inter-university study group, now chaired by Prof. Christian Sindic, is to encourage research and the dissemination of information on this painful neurological disease. To ensure annual research funding, the Gonsette family took action and gradually accumulated a sizeable research fund. Given the scope of this task and the amount of the funds, Richard Gonsette decided in 1987 to create the Charcot Foundation, named after the famous French physician who first identified multiple sclerosis in 1868. The Foundation was placed under the patronage of HM Queen Fabiola, while the Princess Elisabeth de Chimay became its Honorary President. A Financial Committee chaired by Baron Alain Philippson was entrusted with the Foundation’s financial management, under the supervision of a Board of Directors and a Scientific Committee comprising a number of prominent Belgian citizens, including State Minister Philippe Maystadt and a number of neurologists from Belgium’s various Faculties of Medicine.

This brief summary of Richard Gonsette’s stellar career gives a sense of his considerable gifts and enables us to appreciate the magnitude of his achievement. All of us who were lucky enough to be acquainted with Richard Gonsette will remember his intense and persevering commitment. All that Richard Gonsette has done, his courage, his dedication, his skill and intelligence, will remain with us. The example he set to his patients, students, assistants and colleagues, and not least to his much-loved family, all that too will remain.

Excerpt from the funeral eulogy given by Prof.J-M Brucher, 18 November 2014.