Multiple sclerosis is a chronic inflammatory disease of the central nervous system that affects over two million people worldwide. Patients may suffer from a wide range of disabling complaints which are not always easy to treat. Although cannabis is best known as a psychoactive recreational drug, it is also increasingly associated with a variety of positive medical effects. 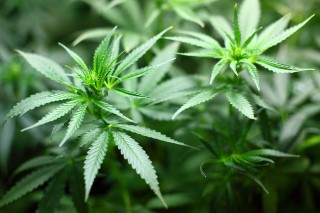 A survey of MS patients had recently revealed that almost half of them have already considered using cannabis in one form or other to minimise their symptoms, and approximately one quarter of them have already done so. The media are now taking a great deal of interest in the subject, generating a risk of controversy, uncertainty and unrealistic expectations in the process. The purpose of this article is to supply reliable information concerning the medical use of cannabis in cases of MS, with emphasis on potential positive effects, without, however, ignoring the potential hazards and legal aspects.

Biological background
Cannabis has been produced for a very long time from various plants (e.g. Cannabis sativa) which originate in Central and South Asia and may contain as many as one hundred different cannabinoids. These are chemicals which affect certain receptors in the human body. The first type of cannabinoid receptor (CB1) is mainly found in our nervous system. Binding of these cannabinoids to these receptors can alter neurotransmission (i.e. communication between nerve cells) and affects pain control, memory and locomotion. This is the main source of the medical effects of cannabis. The second type of receptor (CB2) mainly controls the functioning of the immune system. The cannabinoids most present in cannabis are tetrahydrocannabinol (THC) and cannabidiol (CBD). In general, the plants contain more of the former. THC has a far more powerful impact than CBD on the CB1 receptors, and for this reason is considered to be responsible for most of the potential therapeutic and psychoactive effects. It is not exactly known how CBD works, but other paths are probably involved. CBD itself is not psychoactive and may even counterbalance the psychoactive effects of THC. Not only are cannabinoids produced by plants, the human body itself generates some and they can even be manufactured synthetically.
Medical effects

Currently, Sativex®is the only authorised cannabinoid-based drug in Belgium. It is a solution of fixed quantities of THC and CBD and designed to be sprayed on the lining of the mouth. Scientific research has shown that Sativex® and medicinal cannabis in general can have positive effects on the subjective interpretation of spasticity in MS patients, and probably also on pain, sleep quality and bladder control. In Belgium, the drug is only reimbursed by social security in the case of MS patients who experience disruptive levels of spasticity which have not responded adequately to traditional spasmolytic medication (e.g. baclofen). But first, the patient’s symptoms must satisfactorily improve during a trial period of 8 to no more than 12 weeks. The system is strictly controlled as detailed clinical information must be kept and the medication may only be supplied at set intervals by a hospital pharmacy. As yet, there are no direct comparative studies between cannabinoids and traditional spasmolytic drugs. As the CB2 receptors are involved in the immune system, there is also a theoretical possibility that cannabinoids may actually affect the progress of MS. Although so far research in this direction has proved disappointing, additional studies are probably required. In some countries, medicinal cannabis can be used in cases of epilepsy, nausea and vomiting.

Additional research on medicinal cannabis should be encouraged

Side-effects
Although the medical use of cannabis can have side-effects, these are usually mild. Dizziness, concentration problems, dry mouth, nausea and increased fatigue are the most commonly reported complaints. Exposure to cannabis has also been linked to the development of psychosis. For this reason, Sativex® may not be prescribed to patients with a personal or family history of psychosis, or if they suffer from a serious mental illness. A number of studies show that suicide risk is a potential concern, but so far this has not been adequately proven. The same applies to cardiovascular complications. However, the chronic use of cannabis does appear to have adverse effects on cognition. In the case of Sativex®, these are probably reversible, but long-term effects are as yet unclear. However, the likelihood of habit-formation and dependency is limited.
The legal position

At this point in time, decriminalisation of the use of cannabis in general is very much in the air internationally. In Belgium, as in many other countries, the possession of small quantities exclusively intended for personal use is tolerated, despite being strictly prohibited by law. CBD-based preparations constitute an exception, provided the THC content is less than 0.2% and they are not intended for human consumption. This ensures that such products must be sold (officially) as massage oils, fragrances and the like.

On the other hand, the use of medicinal cannabis has been authorised in many countries. In this respect, Belgium remained somewhat lagging, until Sativex®‒ under the conditions specified in the previous paragraph – became the only substance authorised by law.  However, the Belgian Federal Agency for Medicines and Health Products issued a circular in August 2019 which interprets the law in such a fashion that chemists may use CBD as an ingredient in medically prescribed pharmaceutical compounds, provided the patient’s (unavoidable) daily exposure to THC contamination does not exceed a specified limit. The consumption of CBD preparations procured through other channels is inadvisable as mistakes can be made in the exact composition. Belgian patients in possession of cannabis who travel abroad should also be aware that legislation may vary widely from one country to the next and in some cases may be applied very strictly. Finally, it should be pointed out that there are implications for drivers.
Whatever the circumstances, it is a punishable offence to drive if the presence of THC in the body can be proven. In the event of a police check, drivers may be required to take a saliva test which can detect the presence of THC until approximately 14 hours after use.

Although human beings have been using cannabis for centuries, its use for medicinal purposes is still in its infancy. This is partly due to legal restrictions, which are now currently being eased worldwide. Scientifically, the best demonstrated advantage of cannabis is the reduction of spasticity and pain in MS patients. In Belgium, Sativex®, a mixture of THC and CBD, is the only legally authorised drug and is dispensed under extremely strict conditions. As side-effects may occur, the main focus should always be on the overall improvement in the patient’s condition. The legal requirements concerning fitness to drive constitute yet another legal hindrance. Additional research on medicinal cannabis should be encouraged, including on potential long-term effects (e.g. cognition) and the effects of CBD monotherapy. The presence of the CB2 receptor in our immune system also raises interesting questions about the ability of cannabis to play a more fundamental part in influencing the course of the disease via this pathway.