One innovative, inter-university and multidisciplinary project has been implemented by Prof. Tom Vanden Berghe with Prof. Peter Vandenabeele and doctoral student Emily Van San, who together with VIB/UGent and UAntwerpen have been working on “ferroptosis”. 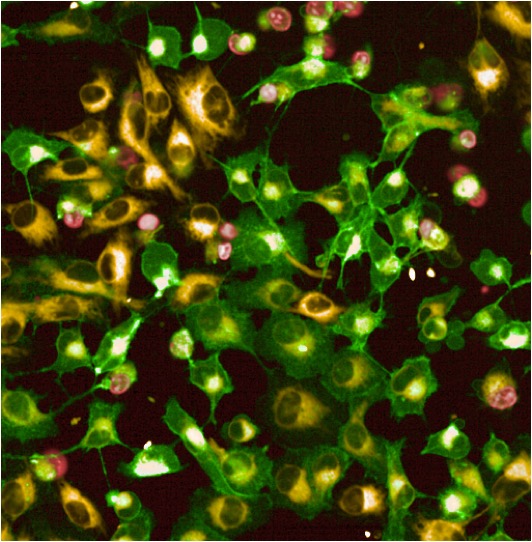 Prof. Tom Vanden Berghe (VIB/UGent – UAntwerpen) :  “Yes. Our bodies contain a kind of biological rust which is basically similar to the rust that occurs on iron in nature. To grow and function properly, our bodies require iron, which needs to be well protected against rust. The formation of biological rust, known in scientific jargon as ferroptosis, can cause brain damage. At our lab, we study biological rust and inflammation within the context of multiple sclerosis (MS).

Copyright: VIB Screening Core & UGent Expertise Centre for Bioassay Development and Screening (C-BIOS). The “rusting” cells turn from yellow to green, after which they die and turn red.

The effect of MS is similar to that of an electrician who strips off the protective insulation from electric wires and causes the system to break down. In the brain, the body’s own immune cells attack the nerve insulation, myelin, meaning that the nerve fibres can no longer correctly dispatch signals to the rest of the body. Earlier research has shown that iron accumulates on the damaged areas of the brain (MS plaques) and that the structure of myelin is highly sensitive to iron.

Certain proteins and vitamins have a “rustproofing” effect, for instance the Vitamin E that is found in sunflower seeds. Unfortunately, there are as yet no rustproofing drugs on the market, although some are being developed in both Europe and America. So, together with Prof. Koen Augustyns (@UAntwerpen), we have developed a new generation of rustproofing chemicals that are in many ways better than earlier drugs. To determine whether these new-generation drugs will have an effect on the clinical picture of MS, the lab has developed a mouse model for relapsing-remitting multiple sclerosis (RRMS). This form of MS affects 85-90% of patients and is characterised by inflammatory relapses, during which myelin is destroyed, followed by remissions during which myelin regenerates and symptoms decrease.

First of all, we noticed that slowing down biological rusting – ferroptosis – delays the onset of the next attack and generally improves the clinical picture. Of course, we have yet to determine whether this effect, and therefore the use of rustproofing therapy, has potential in the case of MS patients. The existing therapies mainly slow down the immune system, and it may be that in the future it will be possible to add rustproofing and even regenerative drugs and more or less completely drive back the disease.”