This research will be performed at the 'Immune Regulation and tolerance-inducing Strategies' (IRiS) research group of the Laboratory of Experimental Hematology, at the University of Antwerp, which is internationally renowned for its expertise in human immune cell biology and their role in the immunopathogenesis of autoimmune diseases such as MS. We predominantly focus on the research and clinical use of dendritic cell and Tregs in a cell therapy for MS. Previous research has resulted in the start of the first clinical study with MS patients in which the safety and feasibility of a cell therapy with tolerogenic dendritic cells is tested. Thanks to the support of the Belgian Charcot Foundation, we aim to develop of a clinically safe cell therapy based on Tregs, aiming to repair the neurological damage that is caused by MS. This will represent a breakthrough in the treatment of (progressive) MS.

Multiple Sclerosis (MS) is the most common neurological disease in young adults. The first symptoms are often presented during the 3th and 4th decade of the patients life. In Belgium the disease affects more than 13.000 people. Although the exact cause of MS remains to be elucidated, it is considered to be an auto-immune mediated disease in which the patient's own immune system attacks the nerve cells in the central nervous system. These reactions against the body's own cells are, in healthy individuals, suppressed by a specialized cell type, called regulatory T cells (Tregs). However, in persons with MS, something goes wrong in this process, which will lead to an inflammatory response directed against the patient's own nerve cells. This inflammatory response will damage the protective layer or myelin sheath around the nerve cells (Figure 1). 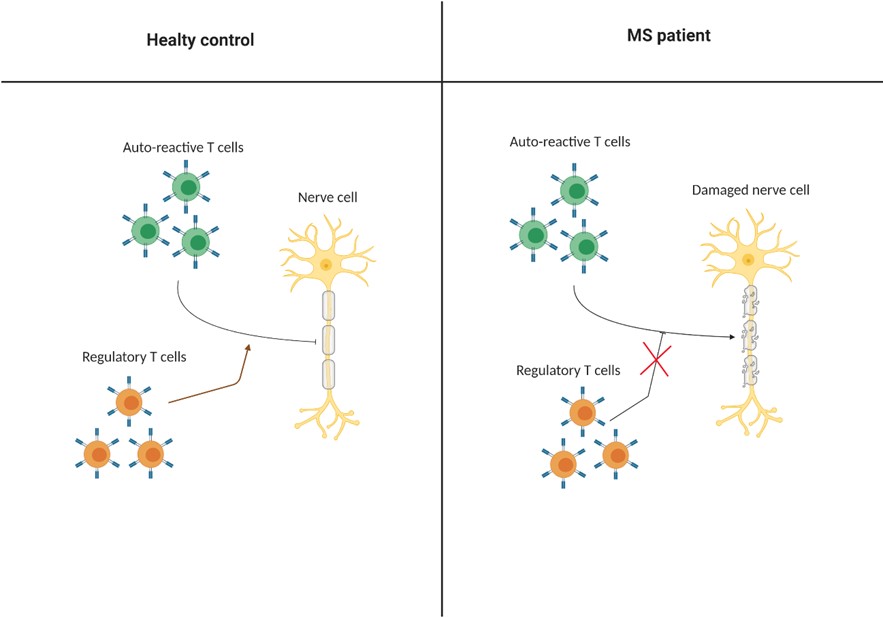 In relapsing remitting MS patients, this damage can be partially or completely recovered at an early stage of the disease and between two relapses. In a later stage, however, there will be no recovery and the nerve cells will be damaged and will lose their function. This will eventually lead to the development of progressive MS, characterized by a continuous worsening of symptoms. While most of the currently available therapies for MS act on the inflammatory response and thereby slow down the progression of the disease, only  a limited amount of treatment options exist for progressive MS. Therefore, there is a high unmet clinical need for treatment strategies that focus on regeneration and nerve cell repair.

Figure 1: In healthy individuals, the autoimmune reaction is suppressed by the regulatory T cells. In patients with MS, something goes wrong in this suppression mechanism. As a result an inflammatory reaction directed against the myelin sheath will occur. This will cause damage to the myelin sheath resulting in the loss of function of the nerve cell.

In this project, research will be Performed to investigate a protein that has the ability to repair neurological damage, namely Brain Derived Neurotrophic Factor (BDNF). This protein plays, among others, an important stimulating role in the recovery of the myelin sheath around the nerve cells. Furthermore, recent research showed that, in addition to their role in suppressing autoimmune response, Tregs also play an important role in the recovery process of the myelin sheath (regeneration). These findings offer the opportunity to focus on Tregs expressing BDNF. In the first stage of this project, the presence of BDNF in the Tregs of MS patients will be identified and compared with those of healthy control. Next, the Tregs’s functionality and capacity to repair the myelin sheath will be assessed, hypothesizing that the functionality of these cells is impaired in MS patients, as compared to healthy controls. Therefore, In a next phase, the Tregs of patients with MS will be modified or engineered in order to produce more BDNF. These engineered Tregs will be generated by means of specialized technique, that was developed and patented by our research group. Finally, the ability of the engineered Tregs to promote regeneration will be investigated using different research models (Figure 2). 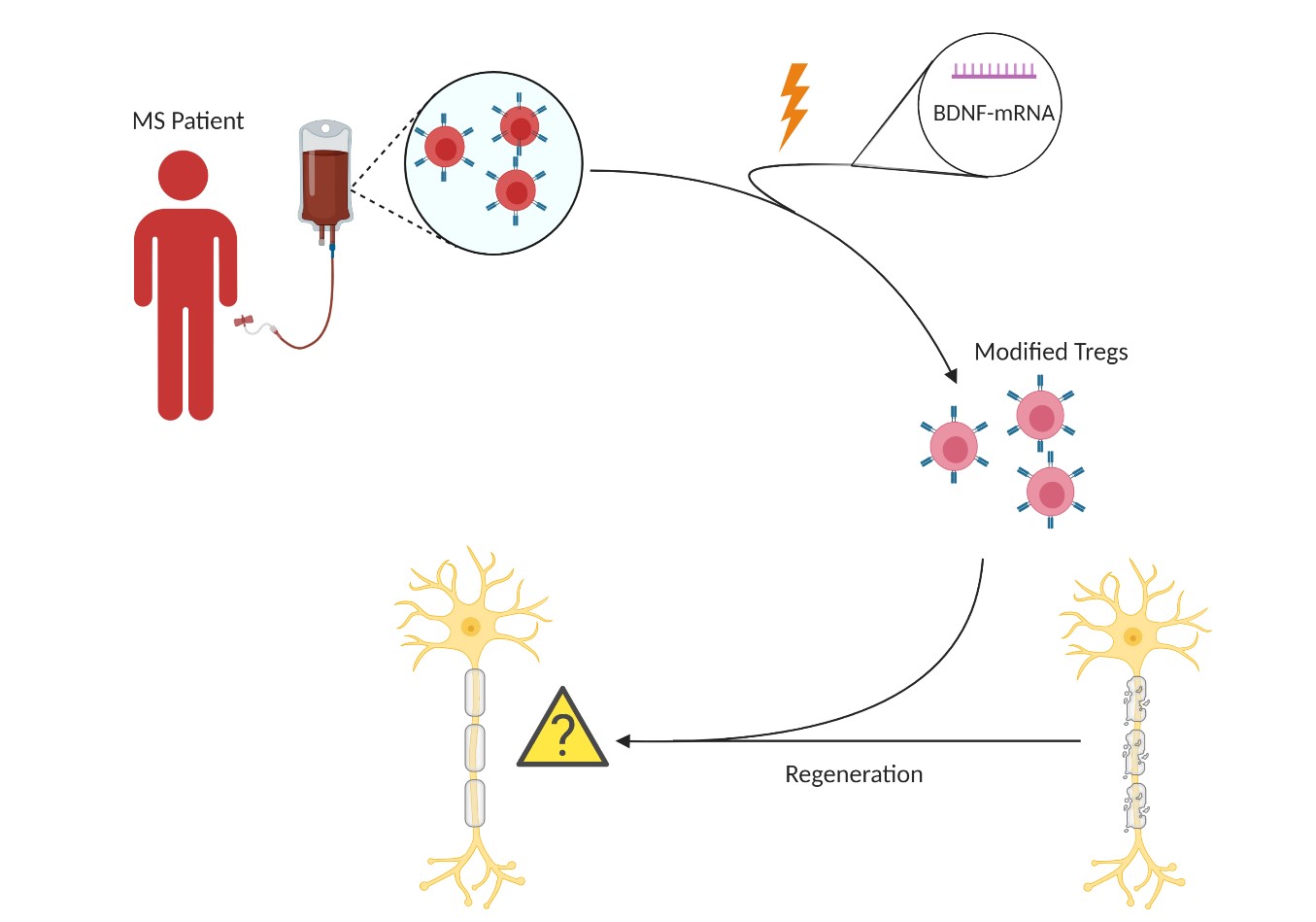 Figure 2: Overview of the 2nd and 3rd phase of the study. Regulatory T cells will be isolated from the MS patient. Subsequently, these cells will be modified by the insertion of BDNF-mRNA with the aim of increasing the BDNF production of the Tregs. Finally, the ability of the modified Tregs to promote nerve cell regeneration will be investigated using different research models.